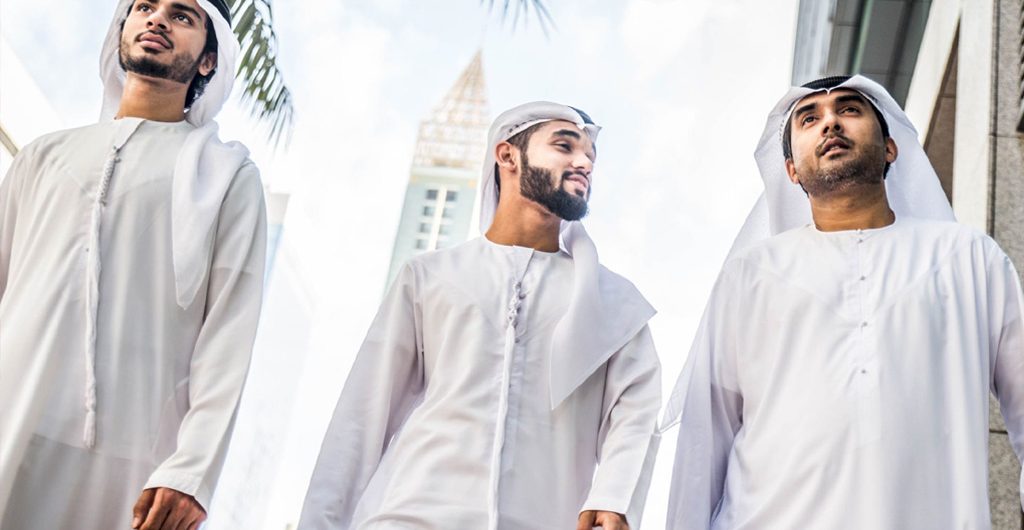 Traditional dress is a symbol of culture and honor for the Emiratis. It has deep roots in their culture and religion. You will rarely find Emirati wearing western clothes when they are in the UAE as they take immense pride in their traditions.

Although the whole of the Arabian peninsula has similarities in clothes, there are several minor differences. Some of them are obvious, while others, only a trained eye can catch.

Emirati clothing emphasizes on modesty. Let’s have a look at the different clothing items used by men and women in the United Arab Emirates.

Click here to read about traditional food of the UAE.

The traditional dress of Emirati men is a Dishdasha or a Kandura. This is a single piece ankle-length garment. In their homes, they sometimes wear half sleeved Kanduras, but formal Kanduras are always full-sleeved.

Emirati Kanduras are mostly white though there are other variations like brown, beige, grey, etc. In Saudi Arabia, the Kandura is also called a Thawb. Their style varies from country to country.

You can distinguish Emirati Kanduras from others because Emirati ones are collarless and have unobtrusive embroidery on the sleeves. Another distinguishing factor of is the long twisted piece of cloth with a tassel at the end. This ornament made of the same material as the Kandura which dangles out of Kandura’s neck is called Al Farukhah.

Emirati men wear Gutra as the headdress. It is an integral part of their traditional Emirati clothing. Gutra, which is a square piece of scarf, protects their head and face from the scorching heat of the desert. They would also cover their faces with it when the dust is too high. Agal is used to hold the Gutra on the head.

There is another variation to Gutra called Shemagh. While Gutras are made of white cotton with a smooth finish, Shemags have red checks on the white. Originally from the central part of the Arabian peninsula, it has also spread to other neighboring regions.

You can find similarities in headdresses worn in countries like UAE, Saudi, Kuwait, etc. Oman and Yemen have a completely different type of head covering which looks more like an Indian Turban.

There are so many ways to style the Gutra. Men wear Gutras depending on the occasion, age, and social status of the person.

Young men mostly wear the Shemagh than the Gutra. They also tie the Shemaghs around the head instead of wearing an Agal. This style is called Hamdaniyya. The Kufi cap, or Taqiyah, worn under the Gutra and Shemagh is also a part of the UAE traditional dress.

Click here to read about the things to do in dubai.

An Agal (Iqal/Eqal depending on the dialect) is the black rope-like band placed over the head to hold the Gutra in place. It is one large circular band which is folded to form two rings when it is worn. Agals are not worn in casual settings. But for formal occasions, Agal cannot be missed out.

Besides the functional part of holding the Gutra in place, they are also an aesthetic element. Emirati agals have two cords (Tarbousha) hanging at the back or have two cords that become one with a few tassels at the end. The number of cords differs between countries. Like, Saudi agals usually do not have these cords, and Qatari agals have four. Perfuming the agals is also part of the custom.

Sometimes you may come across white agals, usually worn by religious scholars. There are also decorative agals that are multicolored and comes with more than two rings. These agals resemble a crown when worn over the head, although these aren’t in fashion nowadays.

Agals were also used to tie the legs of the camel to pin it down to the ground. The most expensive agals are those made of Iraqi wool, and more affordable ones are made of synthetic yarn.

Also dubbed ‘wing of the Arab’, Bisht is the common factor that connects all of the Arab cultures. It has been used by them for thousands of years. Unlike all other pieces of traditional Emirati clothing, the Bisht is quite similar across all Arab countries. It is a ceremonial sleeveless cloak worn over the Kandura that are either black or beige and trimmed with golden or silver embroideries. The African Burnous is a cultural adaptation of the Bisht.

Bishts are decorated with gold, silver, or copper. Fore that reason, the prize of the Bisht depends on the amount of gold or silver used in it. The intricate Embroidering requires the hands of a skilled artisan. Bisht, therefore, is a luxurious garment that can be very expensive, costing as much as 15,000 Dhs.

Because this is worn on top of the Kandura, some people mistakenly think that this is winter-wear. Though, in the past, the Bedouins used Bisht in winter to combat the cold, nowadays it is used for special occasions.

Hand made soft woolen Bishts are the most prized among all. Those made of camel wool are also prestigious. When you go to shopping malls and see one displayed on the shopfront, that’s probably made of cotton or polyester. Thick ones are from cotton or wool while the light see-through ones are of linen.

Persian traders brought the Bisht to the Arab world. The word ‘Bisht’, which itself has Persian roots, means ‘something that is worn on the back. Even though the Bisht has two sleeves, usually it is worn with only one arm.

In the past, everyone wore the Bisht regardless of the occasion or position. Nowadays, but, Bisht is something that is worn by Emirati men on ceremonies, graduations, and eid or by the royalty. And Emirati grooms wear Bisht for the wedding. You may come across Imams in the UAE mosques donning a Bisht during prayer congregations and Friday sermons.

A white vest called Faneela is worn beneath the Kandura. Woozar, which is another piece of undergarment, is tied around the waist. Traditional footwear for Emirati men is called Na-aal, which is a sandal worn without socks.

While the traditional outfit of Emirati men are mostly white and sometimes shades of light colors, the women wear black.

The traditional outfit of Emirati women is Abaya. An elegant loose fitting flowing black cloak. The Abaya is always worn on top of other clothes. Underneath the cloak, women wear traditional or western clothes. The dark cloak also helps hide the bright colored clothes.

Abaya is not a garment exclusive to Emirati women. Most of the Islamic world, including North Africa and Asia, has adopted this as a part of their Islamic custom. Abaya covers every part of the body from neck to bottom except for the feet and palms.

Traditional Abayas are plain black. Modern Abayas festooned with simple embroidery designs are in vogue nowadays apart from plain grey and brown shades. Although materials like cotton and linen are used to make to suit the hot desert climate, the most popular material for Abayas is crepe. You can easily come across an Abaya designed by famous fashion brands like Chanel or Dior in shopping malls.

When Arab women are within the household or among female relatives, they wear a Kaftan, otherwise called a Jalabiya. Kaftans are highly decorated with embroideries and come in a plethora of colors.

A Kaftan is, in fact, a female version of the Kandura. Instead of the men’s white Kandura, women wear those with more feminine designs and colors. Loose pants called Sirwal is worn along with Kaftan.

Hijab is the umbrella term covering different types of headdresses worn by Muslim women. The Hijab covers the neck and hair according to Islamic teachings. There are numerous hijab styles which we will talk about soon. Very light material which allows for aeration is used to make the headdress. Both headdresses and face veil comes under the Hijab.

Shyla is a black scarf which is loosely draped around the head covering the hair.

It is a face veil which covers most of the face except the eyes. Emirati Burqas are different from those in South Asian countries. They have a distinctive look and are worn like a mask.

Burqa is traditionally made of a special type of cloth unlike the main headscarf. At first sight, the Burqa looks like they are made of metal, but it is a special lightweight and sweat absorbing cloth. These burqas are of red, yellow and green colors among which the red ones are the most expensive while green a tad cheaper.

A small piece of wood keeps the Burqa in shape and bridges over the nose without actually touching the face. Burqa is tied to the back of the head with white cotton strings. In the olden times, every woman made their burqas by hand.

Burqas were worn by girls once they pass the age of puberty. The original idea of it was to provide modesty for women. Some women wear Burqas for special occasions as part of the culture. The younger generation of Emirati women only wear traditional Burqa for wedding ceremonies.

There are a few ways to explore the old traditions of the Arabs in Dubai. A desert safari is one of them. The safari takes you to the desert and to the camp that is modeled like a Bedouin house. The camp lets you live like the Bedouin Arabs for a while. You can dress up in the traditional Emirati clothes, smoke Shisha, ride the camel, and many more. 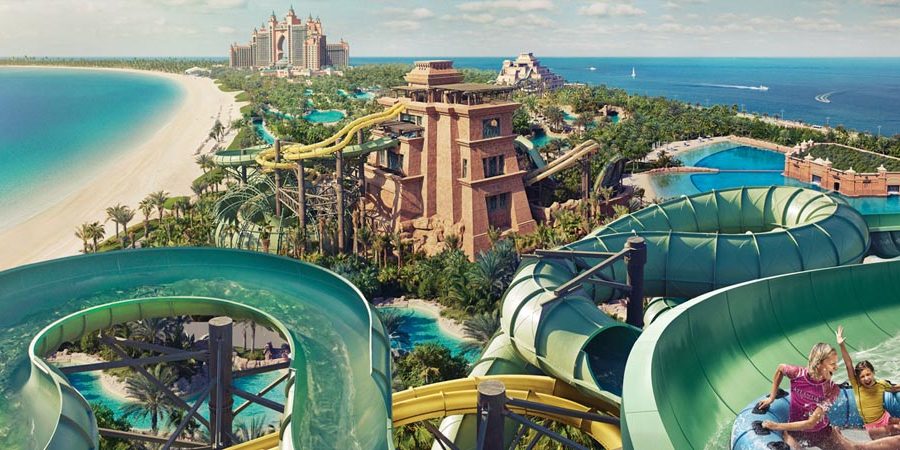